On April 23th NDATV once again took up the Mayor’s challenge and participated in the 2016 Garbage Pickup.

We had twelve ATV’s riding on the roads around our trails picking up garbage.

Thanks to all NDATV members who participated. Pictures of the day, are available here.

NDATV has made it easier to find where to purchase our trail permits in eye catching yellow and red.

Our sponsors that sell our trail passes will be displaying these new signs in their store windows: 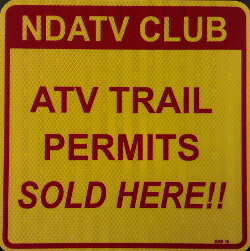 Good News…Trent Hills Bylaw 2016-07 has been passed! ATVs are allowed in Trent Hills from April to November.

You can go to the bylaw’s page by clicking here.

Our second NDATV 2016 event was held on March 12th. Our annual Potluck Dinner and Progressive Euchre Tournament was enjoyed by 22 diners and 20 card players. The big winner of the Euchre Tournament was Barry who had an impressive score of 50 points and won a NDATV Sweatshirt. Kim and Dan tied second with 44 points, Kim chose a women’s golf shirt and Dan selected a new hat. The ‘mud in your eye’ prize was circulated all night among players who shouted out ‘mud in your eye’ upon winning a lone hand. Whoever held the prize at the end of the tournament won the prize. The lucky person to have the last lone hand was Ann, who won the prize of a motion sensor light. The boobie prize was shared by John and Paddi who shared the Steam Whistle price.

Pictures of the event are available here.